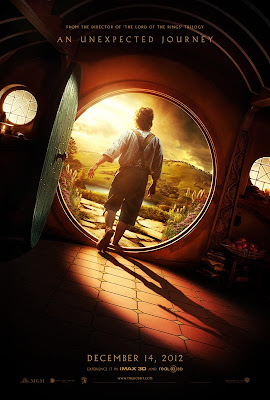 Peter Jackson, director of The Lord of the Rings Trilogy, returns to the franchise that both put him on the map and won him an Oscar. This time he finally turns his hand to J.R.R. Tolkien's prequel novel with The Hobbit; a film experience that fans have been waiting almost ten years for. The famous fantasy adventure, originally published in 1937, sees Bilbo Baggins (Martin Freeman) taken on, well, An Unexpected Journey by his dear wizard friend Gandalf the Grey (Ian McKellen) and a small (no pun intended) group of dwarfs. Along their journey through the mystical world of Middle-Earth the group will encounter many creatures, adversaries and challenges in their quest to reclaim the lost Dwarf Kingdom of Erebor from the fearsome dragon Smaug - not to mention an encounter with Gollum and a certain ring that will change Bilbo's destiny forever.

Of course after the tremendous success of The Lord of the Rings Trilogy there is a lot riding on this series of films that fans have been eagerly waiting for; will it live up to the hype or disappoint? Time will tell, but from the looks of the brand new trailer (that you can watch below) it certainly looks like The Hobbit: An Unexpected Journey will recapture the epic scale and beauty of the original trilogy. And if you're not a Lord of the Rings fan there is more than just that to look forward to with the interesting news that the film has actually been shot at 48 frames per second as opposed to the industry standard of 24 frames per second (meaning that you will see double the amount of frames/tiny-images every second, leading to a much crisper image with smoother movement); it'll be very interesting to see if this takes off or not and how people will take to this innovation, with mixed early responses linking watching it to watching live TV. Of course the obvious downside of this digital revolution is that the film has also been shot in 3D, something that I doubt will hold any benefit to the films - just like it fails to do for any other film either...

Alongside this there is also the recent news that Jackson will shoot extra footage and turn what was originally going to be two Hobbit films into three (with The Hobbit: The Desolation of Smaug being released a year later on December 13th 2013 and The Hobbit: There and Back Again being released the following summer on July 18th 2014). As Jackson himself has reportedly requested this personally it does give me some hope, although there is always the doubt that this is purely a financial operation. Of course for fans of The Lord of the Rings - especially those crazy ones who have the money and time to buy and watch the extended editions - surely the news of more films can't be a bad thing, can it?...


The Hobbit: An Unexpected Journey is set for release in cinemas across the UK on December 14th 2012.

Are you looking forward to The Hobbit Trilogy, or are you starting to get Bored of the Rings!? Will it be a blockbuster or lacklustre? Leave your comments below!
Posted by Dave Startup at 17:33

Email ThisBlogThis!Share to TwitterShare to FacebookShare to Pinterest
Labels: Peter Jackson, The Hobbit, The Lord of the Rings, Trailer Park