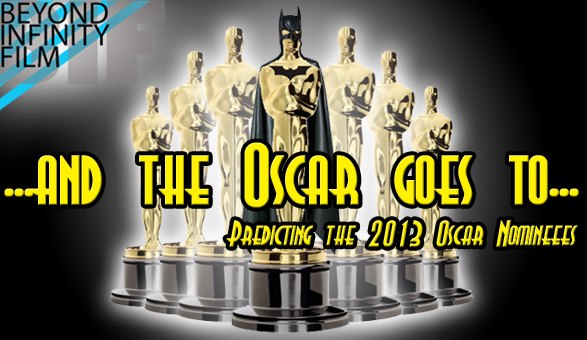 So the summer blockbuster season is coming to a close now, and soon we'll be seeing the wave of 'Oscar-bait' films being released as we enter awards season. Now we may be a long way away from the actual Oscars ceremony yet - with nominations due to be announced on January 15th, and the ceremony itself to be held on February 24th - and it may be too soon to accurately predict what will be nominated and what will win; but that doesn't mean I can't give it a try right!? So here's my little experiment; I've drawn up a list of nominees for next year's 85th Academy Awards that I believe are likely to be chosen based on what has been released so far this year and what is due for release in the awards season, as well as looking at the trends and controversies of past Oscar results. Of course this could all be likely to change, as some relatively unknown film could come out of no-where at the last minute and take all the big awards (and if the last two years' big winners The Artist and The King's Speech are anything to go by, this could very well happen); however if I'm even relatively close to getting this right, then that will say a hell of a lot more about the predictability and politics of the Academy and could provide an interesting debate next February...

So who will be 2013's big winner then!? Well if my predictions are accurate next year's awards ceremony will be a two horse race (similar to this year's with Scorsese's Hugo and Hazanavicius' The Artist) between Christopher Nolan's epic BatFinale The Dark Knight Rises and the Wachowski brothers' (The Matrix) upcoming film Cloud Atlas. Now some of you may be thinking "hang on, those are two big budget Hollywood films - doesn't the Academy only like small budget art-house stuff?" Well no actually, the Academy has been known to nominate and praise a lot of big budget Hollywood films (mega-budget Avatar was nominated for best picture in 2010), and in fact a lot of them have actually won the Best Picture award (including Titanic and The Lord of the Rings: Return of the King). Besides that, what both of these films have in common is that they both to some extent actually bridge this divide by being big budget Hollywood art house films - both sporting an Oscar worthy cast of actors who have won in the past. Just from watching its trailer you can see how that logic applies to Cloud Atlas, which with its large and ambitious scale focuses on a story of humanity and life - and judging by some early reviews that have surfaced this morning after last night's première, it looks like it's got the potential to be a big hit (although one that will potentially divide a lot of audiences), and it certainly will be when the Academy give it their seal of approval. 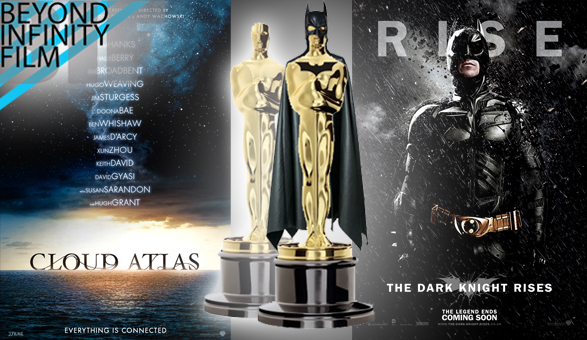 As for The Dark Knight Rises, not only is this a brilliant piece of filmmaking that well and truly deserves the recognition, I also think that there is more to it than that - enter the Oscar politics! For this case I'm going to bring in two examples; The Lord of the Rings: Return of the King, and The Departed. Both of these films won the best picture for two very different reasons, and in each case arguably for not being the best film of the year! It is widely believed that Return of the King did so well at the Oscars as recognition for the entire Lord of the Rings trilogy - and I don't think that I need to point out how this is a similar scenario to Christopher Nolan's brilliant Dark Knight Trilogy do I!? As for The Departed, most people will agree that the Oscar was awarded to this as recognition for Martin Scorsese's entire career after not having won any Oscars for any of his previous films - which the majority of people will agree are better and more original than English language re-make The Departed. Now there was a small bit of controversy back in 2011 when Christopher Nolan was not nominated for the Directing category for his brilliant film Inception - and that there is a strong chance that the Academy will see this as 'Nolan's turn'. If you take all of these factors into account, I think that The Dark Knight Rises does stand a pretty good chance of doing very well at the Oscars next February and possibly taking the big prize.

As for the other big contenders, I think the main ones in the running for a lot of categories but mainly Best Picture will be the following: Tarantino's Django Unchained, Paul Thomas Anderson's The Master (the dark horse that could be this years The King's Speech/The Artist if Harvey Weinstein has his way as he so often does), Tom Hooper's Les Misérables (which almost certainly won't win Best Picture or Direction after Director Tom Hooper won just two years ago for The King's Speech), Spielberg's Lincoln (not to be confused with the one about his fighting vampires...), and possibly Ang Lee's Life of Pi, Ben Affleck's Argo, and the Coen Bros. Gambit - and it is likely that other films will join this list over the next few months. Some of these are very likely to scoop some awards in a couple of categories, and some of them are very likely to win nothing at all - I do still feel that the night will belong to Cloud Atlas or The Dark Knight Rises or both though - of course, only time will tell... 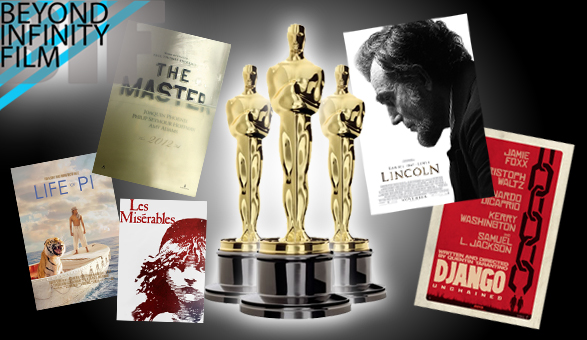 So without further ado - exclusively on Beyond Infinity Film a whole 4 months and 6 days before the academy will announce it themselves - the nominee's for the 85th Academy Awards:

(Nominees in bold represent who I predict will stand a good chance of winning.)

Actress In a Supporting Role:
Anne Hathaway - The Dark Knight Rises (if not nominated for Leading Actress - either category the nomination would be for both roles); Amy Adams - The Master; other three nominees to be confirmed.

Animated Feature Film:
Brave; The Pirates! In an Adventure with Scientists (titled in America: The Pirates! Band of Misfits); Wreck-It Ralph; Frankenweenie; other nominee to be confirmed.

Documentary Feature:
Into the Abyss: a Tale of Death, a Tale of Life; The Imposter; other three nominees to be confirmed.

Documentary Short:
To be confirmed.

Foreign Language Film:
To be confirmed.

Music (Original Song):
Les Misérables (one song has been written for the film); other four nominees to be confirmed (the Academy has announced that this will be the first year that five songs will be nominated for the award, after last year only two being nominated).

Short Film (Animated):
To be confirmed.

Writing (Original Screenplay):
Lincoln; The Master; other three nominees to be confirmed.

So there you have it folks! Of course it's still very early days, and all of this could change completely within the space of a week or so, but let's just wait and see how this little experiment pans out. Of course it says a lot about how predictable the Academy is if these predictions are even remotely accurate, especially considering that most of these films haven't even been released yet! It'll certainly be interesting when the nominees are announced on January 15th - and it'll be even more interesting when the BAFTA nominees are released too as forerunner Cloud Atlas isn't released in the UK until March, making it inapplicable for any nominations...

So what do you think of my prediction? Wrong or Right? Who do you think will win on the night? Have I missed anything off, or is it just too soon to make a prediction like this? Leave your thoughts and opinions in the comments section below.
Posted by Dave Startup at 19:25