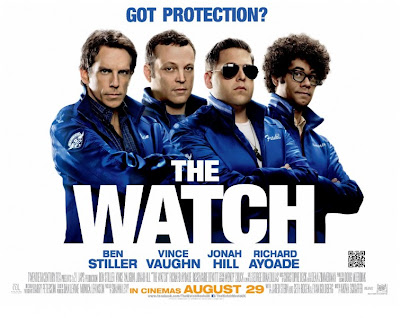 The original title for this film was 'Neighbourhood Watch' before it became 'The Watch' - the most appropriate title however would have been 'The Do Not Watch'...

Ben Stiller, Vince Vaughn, Jonah Hill and Richard Ayoade star in this science-fiction comedy as the members of a very unusual neighbourhood watch group in a small American town. After forming to try and make a difference to the town the group are instantly mocked for being an utter joke, but when an alien invasion strikes the area; are the team able to finally prove their worth by defeating the alien invaders, or will their foolish antics lead to the potential end of the world!?

For a film about the possible end of the world it sure as hell did a good job of convincingly portraying that feeling, as sitting in the cinema viewing The Watch did make me feel like I and the entire world surrounding me was very slowly and painfully dying, as my will to live slowly and steadily slipped away.

There genuinely isn't very much that I can positively say about the film, so let's get the good stuff out of the way straight off. Yes there were a couple of times that I did chuckle during the film (note that I said chuckle, not laugh out loud), although most of the film's gags are examples of extreme humour (turning it up to 11 in an attempt to make something unfunny, funny) or simply not funny at all, and you can almost certainly see the best moments in any of the trailers that have been playing in front of every film for the last few months. Watch the trailer - it's free and it's short - and then go and have a nice day. Admittedly the design of the alien's was pretty good, even if they are taken from Alien, Predator and District 9 (let's think positively; an inspired by homage, not a blatant rip-off...), and the ridiculous green gooey 'semen-texture joke' blood completely let it down. Oh and there are some pretty good songs in there too, but you have to credit those artists and not the film for those. So that's three good things then... well two... maybe just one... actually, zero - even the good bits in this film are bad! 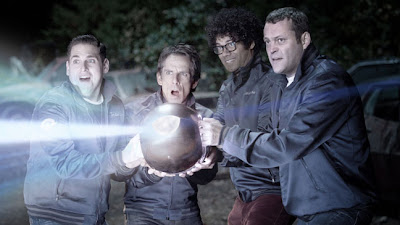 So speaking of the bad bits in this film, where do I begin? Well let's start with the cast as clearly judging by the poster that's what the studio are selling this film on (despite half of them being past their best days, one being just a small TV actor who has the potential to become something more, and the other being the only one of the four who's actually popular at the moment). Ben Stiller is completely wasted in the straight man role - the guy who has to remain serious to maintain the plot whilst the others all idiotically goof off - and as a man with great comedy potential, he is not funny. Vince Vaughn ultimately comes across annoying as a man trying to be funny, but is not. Jonah Hill (an actor nominated for an Oscar earlier this year for his brilliant performance in Moneyball) tries to be funny and popular by doing his best impression of Zach Galifianakis' character in The Hangover (and every other Galifianakis film come to think of it), and ultimately is irritatingly stupid and not funny. Richard Ayoade is the best actor in the cast, but ultimately gets put in the corner for most of the film whilst the 'real Hollywood stars' do all the work, and is therefore forced into being unmemorable and not funny. I'm not sure if I'm making my point clear enough here, but the same two words keep appearing: 'not funny.' This is a comedy that is just mind-numbingly painful and simply put: Not Funny! I wasn't a huge fan of Ted earlier this year, but this makes Ted look like a masterpiece in comparison. There were a number of uncomfortable moments throughout the film where small pauses of awkward silence filled the cinema as the actors were almost pausing for the audience to laugh - which no-one did. At all! It was almost like you could see it in each of the actors' eyes; a look of complete embarrassment and a lack of any motivation - and you know what? I guarantee that not one member of that cast is proud of this film in the slightest. 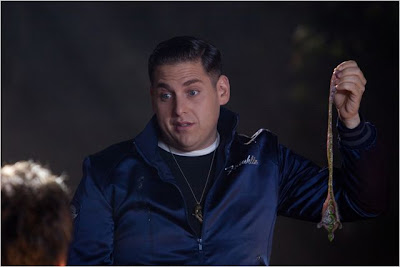 There is another big problem with The Watch, and it is that it doesn't even feel like a film; instead it feels like the following. Firstly, it feels like a star vehicle to give Stiller and Vaughn some work and to try and get them into the public consciousness again, and the boost Hill and Ayoade's profiles - to which the film has completely failed. Secondly, it feels like a half complete script, which apparently it actually is (supposedly it was put on the shelf mid way through writing, and then picked up by the studio who said "this'll do!"), explaining why the film is so inherently unfunny, uninteresting and underdeveloped. Thirdly, it feels like you're watching a studio balance sheet - a film that makes you aware that the studio is just taking that well earned money out of your pocket even if it's not worth it. Now I know that most films exist to make profit, and that's not the point - when you watch most films you don't sit and think about this fact, you're usually invested in it enough that you either don't think about it or appreciate that there's actually some thought, work, care and craftsmanship going into it regardless. When watching The Watch all I could think of (except how much I was hating the experience) was 'how the hell did a film this bad get made!?' Simply put, no-one - I repeat, NO-ONE - making this film thought it was a good idea, or that it would be enjoyable or funny - it is merely a large, greedy corporate vehicle of a film designed to completely exploit a gap in the cinema calendar and its audience. The problem isn't the fact that this is what it is, the problem is when you sit there feeling like this is what it is rather than experiencing an involving, entertaining, and in this case funny emotional response to the film and its characters. 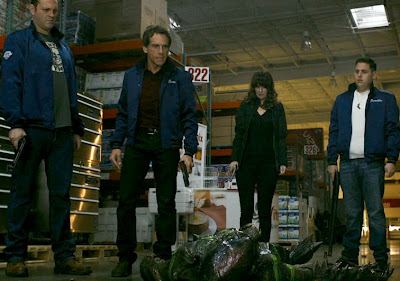 I can sympathise with the alien who's just had its brains blown out in this picture...

The Watch is - simply put - a film so horribly bad that it genuinely gave me a headache just watching it. It is a comedy that isn't funny. It is a star vehicle that won't turn its cast into bigger stars. It is a studio balance sheet that won't make much money. It is a genre film whose target audience won't even enjoy that much if at all, and anyone who has paid to watch it will feel that they are being robbed. It is a film that fails on every level, so much so that I genuinely loathed watching it. It is a dull, uninvolving, and worst of all unfunny comedy film that made me feel bored, angry and robbed of my time and money - and who in their right mind would want to go to the cinema for that? If you want a science-fiction comedy with a similar story; it may not be perfect and for any flaws that it may have, choose 2011's Attack the Block - or anything else, just please do not give your money to this poor excuse of a film that fails to do anything right.

The Watch (certificate 15) is now showing in cinemas across the UK.


Have you seen The Watch? Agree or disagree with my review? Leave your thoughts and opinions in the comments section below!
Posted by Dave Startup at 22:03

Email ThisBlogThis!Share to TwitterShare to FacebookShare to Pinterest
Labels: Review, Ted, The Watch