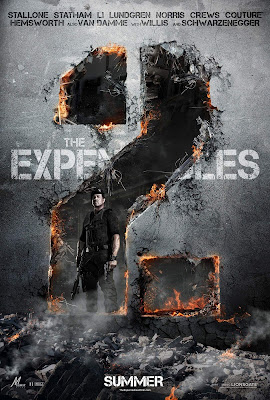 The Yorkie Bar of film returns - are you ready for another dose of 80's-tastic action?

This is the bit where I usually describe the story, plot and premise of the film, but let's face it The Expendables 2 isn't about that at all - it's just about the names, so here goes: Sylvester Stallone, Jason Statham, Jet Li, Jean-Claude Van Damme, Dolph Lundgren, Terry Crews, Randy Couture, Chuck Norris, Bruce Willis, Arnold Schwarzenegger. Did I miss anyone out?

The first film may not have been a masterpiece by any standards, but for pure adrenaline, action, fun and its awesome cast it very quickly became a bit of a guilty pleasure of mine. Going even bigger for the sequel (who knew that was even possible!?) The Expendables 2 could be just as fun as the original, and this new trailer gives us hope of that too; with show stealing moments from Schwarzenegger who delivers some of the trailer's best, if not a little cheesy, lines which actually made me laugh out loud ("I'm Back!") - and with a cast like this, this film could do for 80's action heroes what Avengers Assemble did for modern superheroes!...


The Expendables 2 is released in cinemas across the UK on August 17th 2012.

Do you have to be Man or Mad to see this sequel? Do you think it will be a blockbuster or lacklustre? Leave your comments below!
Posted by Dave Startup at 13:51