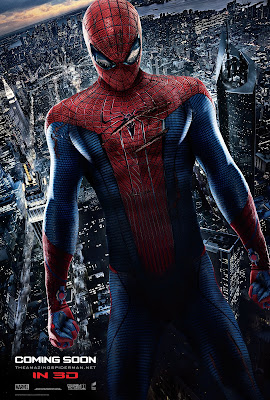 It really has been comic book superhero mania recently, with last week's UK release of Avengers Assemble (released in the US today), the final trailer for The Dark Knight Rises going online on Tuesday, and now a new trailer for The Amazing Spider-Man hitting the web too (pun intended!).

Filling the spidey-boots and suit this time around is actor Andrew Garfield of The Social Network fame, who has the heavy task of getting to grips with his newly found powers and alter-ego, whilst of course avoiding the police, maintaining a relationship with girlfriend Gwen Stacey (Emma Stone), discovering the secrets and truths about his parents, and saving the world from the villainous Lizard (Rhys Ifans) - the big question is, when will he fit in time for his homework!?


Whilst a lot of people were sceptical about this reboot when it was announced years ago, it feels right to see this franchise being re-done, especially after the critically slated Spider-Man 3 pretty much killed the franchise back in 2007 - time has passed, and our expectations from the genre have evolved significantly; this new cast and style can only help to save the Spider-Man franchise in my opinion. I must admit that I although this film does unfortunately sit in the shadow of the other two major superhero films (Avengers and Batman), I really am looking forward to this film, and this new trailer in particular really has given us a lot to look forward to - this could be a hit that you didn't expect to see coming...

The Amazing Spider-Man is released in cinemas across the UK on July 4th 2012.

Are you excited for this franchise re-boot? Do you think it will be a blockbuster or lacklustre? Leave your comments below!
Posted by Dave Startup at 13:20