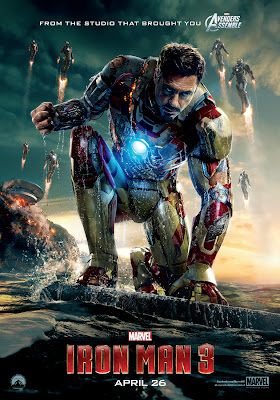 Iron Man may be a globally recognised superhero, but Tony Stark (Robert Downey Jr.) - the man inside the metal suit - is just a man. He may be the 'genius, billionaire, playboy, philanthropist' that the not so shy and retiring character let's on, but even those credentials could not prepare Mr. Stark for revelations of Gods, aliens and wormholes to other dimensions in the battle for New York in 2012's Avengers Assemble. This is why Tony Stark cannot sleep...

Following on from the events of the hugely entertaining global success story of last year, Avengers Assemble, the team at Marvel Studios face two huge problems in following-up the franchise: how to match or top a film that huge, and how to make a stand alone film that doesn't cause spectators to ask "why doesn't Iron Man just call in The Avengers for help!?" Everything considered, these are two huge obstacles to overcome, and fortunately for director Shane Black and the rest of the team behind Iron Man 3, they have successfully cleared both hurdles with ease. 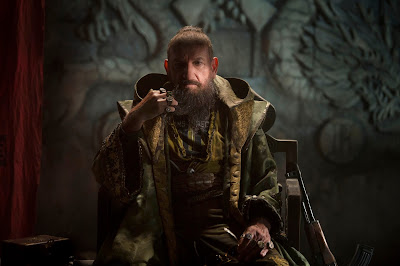 Ben Kingsley - fiendishly fantastic as The Mandarin in Iron Man 3.

To solve both of these problems, the filmmakers have pulled the focus onto the character of Tony Stark, in an ambitious and bold move that sees him facing his own personal demons as he fights anxiety, night terrors and panic attacks in the wake of The Avengers - clearly no amount of shawarma is ever going to overcome the trauma of plummeting through a wormhole! Iron Man 3 is very much about Tony Stark as the man inside the suit, and the effects that this (literally) heavy burden is having on someone who is, at the end of the day, only human. Sent off into the middle of nowhere after a terrorist attack by the film's villain, the Mandarin (Ben Kingsley), destroys his Malibu home, Tony Stark - with a broken Iron Man suit in tow - must use his intelligence and technical ability alone to get his life back on track and face off with a villain with whom Stark has a very personal vendetta. This isn't a fight for Iron Man's 'super-friends' (aptly named so by John Favreau's body guard character, Happy); the stakes are higher than ever in Stark's most personal challenge yet.

Yet unfortunately, whilst Tony's story does seem to wrap up tidily (throwing question over the need for further Iron Man films), the film's fascinating premise of Stark's anxiety attacks never seems to find a resolve. At the end of it all, Iron Man 3 turns into a large action blockbuster that seems to forget the heart and soul of the film somewhat - perhaps unsurprisingly so. Fortunately for Downey Jr.'s egotistical character the panic attacks seem to simply stop, unfortunately for us we lose the satisfaction of him overcoming his inner demons. Yet this is not to sound negative for the blockbuster nature of the film; the action set pieces for which are often incredibly exciting and entertaining to watch - it is just a shame that the fascinating and exciting conceit at the centre of the film gets lost and forgotten somewhat amongst the large 3D CGI explosions. 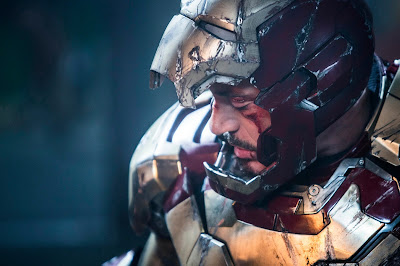 Things get very personal for Tony Stark in Iron Man 3.

A mention must not be forgotten either for the film's humour, with the comedic dialogue expected from an Iron Man film turned up to 11 to create one of the funniest film of the year so far, and perhaps the most enjoyable Iron Man outing of the franchise yet. Quick one-liners (occasionally very edgy ones at that), some great slapstick humour and moments of misdirection create some big laughs throughout the film - balancing the film's serious, dark and dramatic moments with some genuinely funny comedy to create a fun and ever-so camp superhero film to match the likes of the studio's Avenger predecessor. And as mentioned briefly, misdirection is a huge theme of the film, and a massive plot twist demonstrates this perfectly; in fact it is this that makes Iron Man 3 stand out somewhat amongst other films of this type, with a very, very brave and totally unforeseeable twist that well and truly alters your perception of what is going on, and of what this film is capable of. Naturally, I will not mention what it actually is and urge you not to look it up either; I guarantee that no-one will anticipate it coming, and it's worth the wait...

The film's cast is strong, and for a change Robert Downey Jr. doesn't rely entirely upon his fast quips and large ego to demonstrate some moments of genuine and very good acting. Gwyneth Paltrow and Don Cheadle have fantastic supporting roles which are expanded substantially from the previous outings. Perhaps rather problematically however, whilst Pepper Potts does gets herself some strong female action moments in the film for a change, she does so after acting as a damsel in distress and whilst wearing only her underwear (it's set at Christmas too - does she not get cold!?) - who said misogyny was dead? Above and beyond the rest of the ensemble however is franchise newcomer Ben Kingsley who steals the show with a fantastically devious performance as Osama bin Laden the Mandarin that is worth the price of admission alone 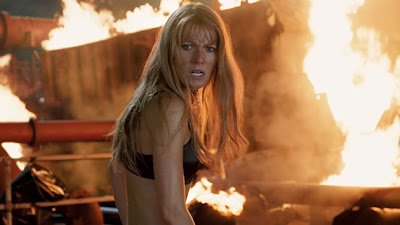 Through strong character development, Pepper Potts gets the chance to kicks ass - but why is she naked!?

Iron Man was a very good and strong film, Iron Man 2 was a bit of a mess, and Avengers Assemble was something else entirely; but with a bold concept, an ambitious twist, large scale action and a lot of laughs, Iron Man 3 may just be Tony Stark's most enjoyable moment yet. Let down somewhat by the fact that the fascinating conceit of Stark dealing with anxiety attacks seems to get misplaced and forgotten amongst the large scale action set pieces, Iron Man 3 is still a very strong film to kick off Marvel's road to The Avengers 2 - and with Downey Jr.'s contract with Marvel up, and the films conclusive ending, if this is the last solo outing for Tony Stark, then he certainly goes out on a high.

Iron Man 3 (certificate 12A) is now showing in cinemas across the UK.


Have you seen Iron Man 3? Leave your thoughts and opinions in the comments section below!
Posted by Dave Startup at 21:25