Any eager readers may have noticed that there hasn't been an awful lot of activity here on Beyond Infinity Film for quite a while (over a month!) and for that I sincerely apologise - University work and adventures to New York, New York may have kept me occupied of late; but fear not, for as the great and powerful Schwarzenegger would say: "I'm back!"

Since my last article, a lot has happened within the world of film, most notably of course being the Academy Awards, in which Ben Affleck's Argo of course took the Oscar for Best Picture (rightly or wrongly, who am I to say... but it's wrongly!), and with it came the last wave of awards season film releases trying to win the hearts of awards season voters. I was fortunate enough to be able to see most of the best picture nominees in the lead up to the big night (sorry Beast of the Southern Wild, I did miss ye!), as you are about to see. If you are still wondering what this article is all about, this essentially a catch-up of the films I caught, and the reviews I missed, hence the title - The Great Review Revue! It's like that old joke about buses, when you wait for one to show up and two show up at the same time, except this time six have shown up, very, very late... (sorry, better late than never!) 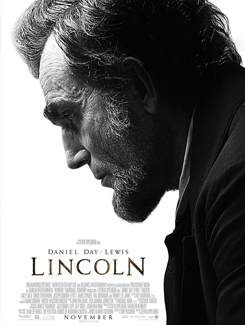 Lincoln (Certificate 12A)
I don't think that anyone was surprised when Daniel Day Lewis picked up his record breaking third leading actor Oscar for his remarkable performance as former US President Abraham Lincoln in Steven Spielberg's magnificent biopic; quite frankly it's just a shame that the film didn't pick up many more awards than that! One of my favourites of this years big contenders (alongside Ang Lee's Life of Pi), the film focuses in great depth on the final defining years of Lincoln's presidency, with great drama, emotion and authenticity. Spielberg's direction and talent for large scale drama (especially in war time America), paired with a solid cast of performances (none more impressive than that of the lead) made Lincoln a well and truly authentic feeling piece of cinema, bringing the people and era to life like never before. A masterful, triumphant and unmissable piece of filmmaking by the world's most iconic director.
Verdict: ★★★★★ 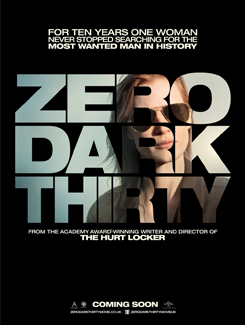 Zero Dark Thirty (Certificate 15)
Katherine Bigelow's follow-up to Oscar winning The Hurt Locker saw the director returning to modern warfare with the controversial film about the search and capture mission of Osama bin Laden. Zero Dark Thirty is very bold move for the director, but one that more than paid off. ZDT is a very edgy, tense thriller that gives its spectators a lot to consider. What is particularly excellent about the film is that it creates the basis for further discussion on the many (and there are many) controversial real life events that occurred in the hunt for bin Laden, in particular the scenes of torture that sparked big reactions in the media, some of which look like they've been lifted straight out of a Saw film! Brave is certainly the appropriate word to sum up Bigelow's latest film, especially so soon after the events themselves actually happened, but regardless of the arguments in the media Zero Dark Thirty provides an interesting commentary of recent years, and is not to be missed.
Verdict: ★★★★★ 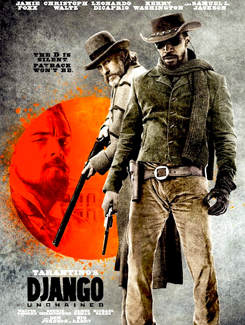 Django Unchained (Certificate 18)
The release of Django Unchained alongside the aforementioned Lincoln created an unusual brief trend of slave films in cinemas, but Tarantino's latest couldn't be more different if it tried (provoking an interesting point of comparison for a 6 hour double bill). The usual Tarantino shtick can often be a little hit 'n' miss for me, but perhaps the thing that I admire most about Django is it's reinvention of the old Western genre that reinvigorated it for a modern contemporary audience with huge success. Personally I could have done with a little less of the extreme violence in the film (cue the usual "but it's a Tarantino film!" response) as it wasn't necessarily unnecessary, just not what I want to see - slightly tip-toeing past the line of taste and decency a couple of times. Aside from that, and a few songs that felt too modern and out of place, Django Unchained was an enjoyable - if not a little long - film, with a strong award winning screenplay written by its often fascinating and always quirky director.
Verdict: ★★★★☆ 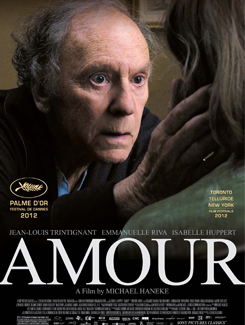 Amour (Certificate 12A)
Michael Haneke is not famously known for being a nice and cutesy film director (his film Funny Games - either the original or the US remake, they're both essentially the same - is perhaps one of the few films that has shaken me up the most), therefore a film about the loving relationship of an elderly couple, the female half of which is slowly deteriorating as her time runs out (played in an extraordinary performance by Emmanuelle Riva), doesn't really sound like his kind of thing. So it is slightly ironic that this could well and truly be Haneke's masterpiece. From the film's description it certainly sounds like it would be quite a tear jerker, but rather surprisingly I actually sat through the film dry eyed, which is no bad thing, in fact I applaud the film for it. The filming style, the fantastic performances and perhaps most importantly of all the complete absence of non-diegetic music through the film make the film feel  very, very real as opposed to a fictional piece (it is only the edits through greater periods of time that reminded me that it was a film). Had Hankeke wanted me to sob like a baby he could have, but instead of abiding to mainstream conventions of layering schmaltzy music over the film to tell the audience what to feel, he does the opposite, and what comes as a result is a highly engaging and remarkable piece of filmmaking.
Verdict: ★★★★★ 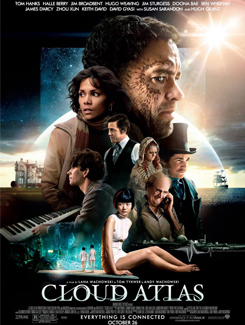 Cloud Atlas (Certificate 15)
It's a bit of an enigma this one, but as with everything you take as much from it as you put in - so invest, because it's worth your time if you do. Based on the book by David Mitchell (no, not that one), Cloud Atlas is a multi-narrative story that tells the tales of many different groups of people from many different periods of time (played by the same actors, yet avoiding becoming a game of 'Where's Tom Hanks?'), presented cleverly through some superb editing to allow the viewer to see the links that join everyone together. For most of the film it may be hard to tell where everything is actually going (after a quick toilet break I asked my dad who I went with if I had missed anything important, to which he replied "no... or maybe you've missed the whole thing - I don't know!"), but for a film that is short of 3 hours long, it never got uninteresting, inaccessible or boring. It's a film that you could study to no-end, but at the end of it all I got a great sense of humanity, and what makes us as a human race all unified as one, and it takes a very impressive film to pull that off! All things considering, it is a shame that not many people actually went to see Cloud Atlas, it could have really benefited from a few deserved Oscar nominations to drive up the ticket sales...
Verdict: ★★★★★ 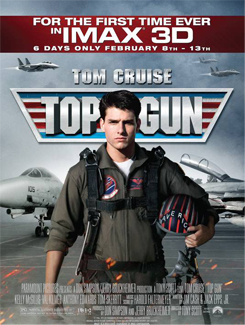 Top Gun 3D (Certificate 12A)
Consider this a little bonus review; firstly because it's a 27 year old film, secondly because it's a 3D/IMAX re-release, and thirdly because it hasn't actually got a UK release date (not yet at least!). Nevertheless, during my trip to New York I had a free night and decided to give the American cinema experience a go (25 screen AMC multiplex at Times Square), and as I decided that nothing else was really worth watching (25 screens and nothing on...) I was saved by one of the final performances of the limited 3D re-release of Top Gun. I'm not a 3D fan, but truth be told it was done pretty well for Top Gun, especially impressive considering its age. Of course it was the aerial training/fighting shots that worked the best (I don't need to see Tom Cruise's changing room/sex scenes in 3D), but truthfully the best bit was just the experience of seeing the blockbuster classic on the big screen. The 80s-tastic, action-packed, banter-filled and genuinely heartfelt, unashamed popcorn blockbuster flick (not to mention its kick-ass soundtrack) is and will remain the great reminder of the late Tony Scott's cinematic legacy, and long may it last.
Verdict: ★★★★☆

Most of these films may have come and gone from the cinemas (and in the case of Top Gun 3D may never even arrive!), but if you get a chance to catch any, or pick up the inevitable DVD release that will soon be here then I certainly recommend that you do. We're only a few months in, and 2013 has already shown a promising start for what is already shaping up to be another great year of cinema...
Posted by Dave Startup at 12:02