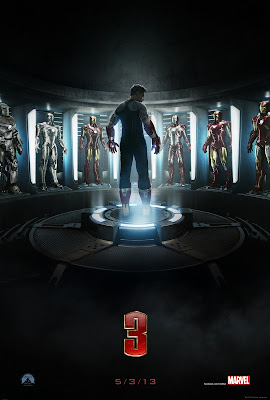 The Journey to The Avengers 2 Begins...

"Marvel Studios’ Iron Man 3 pits brash-but-brilliant industrialist Tony Stark/Iron Man against an enemy whose reach knows no bounds. When Stark finds his personal world destroyed at his enemy’s hands, he embarks on a harrowing quest to find those responsible. This journey, at every turn, will test his mettle*. With his back against the wall, Stark is left to survive by his own devices, relying on his ingenuity and instincts to protect those closest to him. As he fights his way back, Stark discovers the answer to the question that has secretly haunted him: does the man make the suit or does the suit make the man? Starring Robert Downey Jr., Gwyneth Paltrow, Don Cheadle, Guy Pearce, Rebecca Hall, Stephanie Szostak, James Badge Dale with Jon Favreau and Ben Kingsley, Iron Man 3 is directed by Shane Black." (*So much love for the use of this pun in the studio's official synopsis!)

It has only been a few months since Robert Downey Jr. last put on his most famous suit by gracing the big screen in Marvel's mega-franchise Avengers Assemble, and just one year on; he's back! As the synopsis and the new trailer released this morning suggest, this seems to be Tony Stark's most personal challenge yet (don't count on him giving his Avengers pals a quick call for help in this one), setting up a film which should be more along the lines of the original Iron Man and deliberately steering away from Iron Man 2; the overcrowded nature of which didn't know whether it wanted to be an Iron Man sequel or an Avengers prequel - sounds good to me!

It looks like the trailer is confirming the rumours about the use of the comic book's Extremis storyline with Stark and the Suit starting to become one - something which should prove to make an interesting twist and really push the character to the limits; which probably explains those foreboding and bleak, snow-ridden shots at the start and end of the trailer. With Ben Kingsley playing comic book villain the Mandarin - who is already resembling something of a Bane-like terrorist in this trailer - this third instalment looks like it should be a solid addition to the Iron Man franchise, and rather promisingly not unlike certain themes and tones from Nolan's Dark Knight Trilogy; with a new director, a new style and a new tone, Iron Man 3 is already looking set to kick off Marvel's Phase 2 plan with a bang as it ventures its way down the long road to The Avengers 2...

What do you think? Check out the new trailer below and leave your thoughts in the comments section.

Are you looking forward to Tony Stark's third installment, or is this iron starting to rust? Will it be a blockbuster or lacklustre? Leave your comments below!
Posted by Dave Startup at 11:48