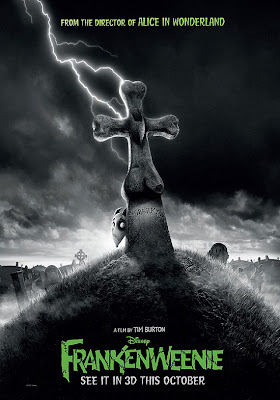 In the small American town of New-Holland, a lonely young boy called Victor Frankenstein (voice of Charlie Tahan) lives happily with his parents (voices of Catherine O'Hara and Martin Short) and his canine companion Sparky; that is until Sparky is tragically killed in an untimely accident, leaving Victor alone without his best friend. But inspired by his new science teacher Mr. Rzykruski (voice of Martin Landau), Victor tests the arguments of nature versus science when he brings his pet dog back to life. With is four-legged friend back, all seems well for Victor, but how will everyone respond to the young boy's actions? And when Victor's classmates are inspired to do the same, could the results turn out to be much more horrific than the inhabitants of New-Holland could ever imagine?...

It's been 7 years since Tim Burton last ventured into stop-motion film making with his 2005 film Corpse Bride, but now he returns to the much-loved medium with Frankenweenie. Adapted from his 1984 short film of the same name, this family horror is a very personal project for Burton; being both something that he's wanted to make for years, and a film that is very close to actually being a biographical piece on Burton's childhood (minus the un-dead dogs and giant monsters of course!). So does it live up to his other stop-motion films? No, not exactly, but it's difficult to compare it to the likes of The Nightmare Before Christmas (perhaps his most iconic work), which has far more of a fantasy feel whilst Frankenweenie, which is set in a more realistic human-inhabited world, feels a lot more contemporary. But let's be fair, that's not really a criticism; it'd take a lot to beat The Nightmare Before Christmas... 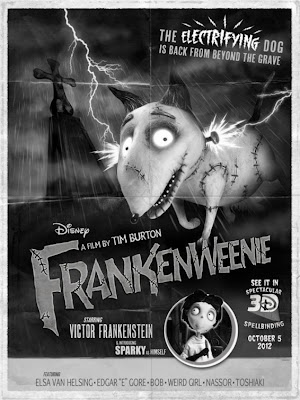 This retro poster perfectly encapsulates the B Movie Monster Film style that the film evokes.

What we get as an end result from Frankenweenie is a fantastically fun piece of family entertainment that is at times quite scary considering its market (good on ya Burton, kids do need a few scares too from time to time; something that most studios shy away from) - which is a very important factor as the film itself actually works brilliantly as a pastiche of classic monster movies. It's unbelievable how many classic horror films and monster B movies that the film is able to pay homage to within its 87 minute run time - the obvious of course being Mary Shelley's classic gothic story Frankenstein, upon which the main story is inspired. But then there are nods to Dracula, The Mummy, The Wolfman, The Bride of Frankenstein, Igor, Van Helsing, Gremlins, Creature from the Black Lagoon, The Invisible Man, Godzilla, and many, many more - part of the fun is trying to find them all! This genre pastiche is executed superbly throughout the entire film, which itself feels like one of the B movie monster films that it is referencing; thanks to the choice to make the film black and white (a brave and highly commendable choice), the stop-motion animation that I'm a huge supporter of (which feels appropriate concerning the monster characters which were often Ray Harryhousen-esque clay creations in the referenced films), and even the use of font which is not unlike that incredibly clichéd font that you'd likely recognise from all of those old B movie horror films and their trailers and posters. 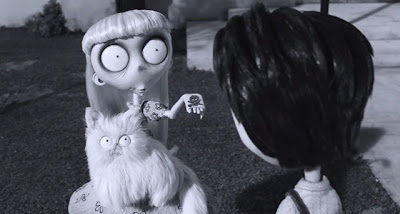 With a name like 'Weird Girl' it's pretty obvious that her parents hated her...

The story itself is a lot of fun, with a number of uniquely Burton-esque characters who are quirky but somewhat relatable to too. One of the stand out characters who is aptly named 'Weird Girl' got a lot of laughs from me and others in the audience, not only because as her name would suggest she's weird, but also because we all know one person from our school classes who was like her (and if you didn't know anyone like her, then I have some bad news for you...). It's also interesting to watch the film in a double bill with the original live-action short film that Burton made in 1984 (which you can watch here), especially to see how Burton has kept a lot of the original film (including many shots which appear identicle) and adapted it for the feature length version which is roughly triple the run time; I do recommend watching this either before or after seeing the film, consider this your homework class...

It's not something that I usually do in my reviews, but in this case I'd like to talk a little bit about 3D for a change! Usually I avoid the matter in all of my reviews as my opinion on the cheap glasses gimmick is always the same: don't bother! I've never found the cheap effect to ever add anything to any films - only to take away, primarily from your wallet - and I actually think that if the big 3D king Avatar was released today in the midst of the 3D run that people wouldn't actually care about it that much, and that it was only a big deal because it was most people's first digital 3D release (watching it through rose tinted glasses - well, grey polarized glasses); and the 3D films are almost always available to watch in 2D anyway. However I feel compelled to mention 3D in this case because you know what; it actually added something this time around. Yes, you heard that correctly; I just said something positive about the inclusion of 3D in a film! 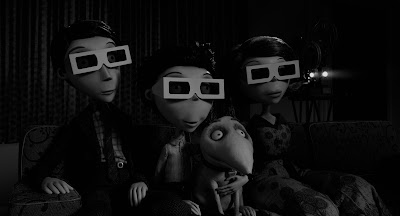 Can Frankenweenie change the way we see 3D? No, you still need those stupid glasses to see it...

Now let's get this cleared up straight off - the 3D effects still don't work, but funnily enough that's why the 3D does actually work in this case! Confused? Bare with me; Frankenweenie is a huge pastiche to the classic horror and B movie monster flicks that Burton grew up with, many of which through their releases, re-releases and numerous sequels actually used the gimmicky blue and red 3D glasses back in the day. You can probably imagine the cheap style monster movie posters and trailers that I'm talking about, and a great deal of effort is put into the film to make Frankenweenie feel like one of those films that it's paying homage to. With that in mind, the fact that I was watching it darkened, ghosting and with very little 3D effect actually felt appropriate; and considering that the first thing that you see in the film is Victor showing his parents a low-budget 3D monster movie that he had made with his toys and Sparky, the addition of those cheap glasses actually felt like they were intended rather than being a studio forced gimmick - working as a Brechtian alienation device to make you realise that you are in fact watching a film that is just like those old 3D B movies. Having said that, without the glasses you do get that perfect 2D black and white image which is just as good, and you can also really appreciate the little touches that the glasses-led darkening shadows; but ultimately, the 3D actually feels somewhat justified this time around (consider this a one-off though...)

Earlier this year we saw Joss Whedon pay tribute to the modern horror film for adults in The Cabin in the Woods, now Tim Burton has created a lovely companion that is a pastiche to the early horror genre and B Movie Monster films that Burton adored as a child. Frankenweenie is a lovingly crafted stop-motion animation that may not be the next Nightmare Before Christmas, but certainly is up there. A lot of fun and with a scare or two thrown in for good measure, this is a film that everyone can watch and enjoy together as a family (even one that parents and film-lovers might actually enjoy more); and one of the best things I can say about the film is that it actually changed my mind on 3D if only briefly, with the effect - or rather the lack of any significant one - actually adding something to the narrative of Burton's wonderful film!

But then again, 3D is still rubbish...

Frankenweenie (certificate PG) is released in cinemas across the UK on October 17th 2012.


Is Burton onto another winner here, or is Frankenweenie destined for the dog house? If you've seen it what did you think? Leave your comments below!
Posted by Dave Startup at 22:09