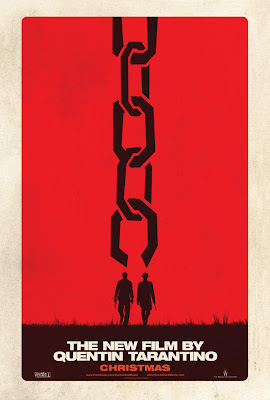 After creating cult classics out of Reservoir Dogs and Pulp Fiction, and having turned to the Nazis in his last film Inglourious Basterds, director Quentin Tarantino is now turning his hands to a film of the Western variety, with Django Unchained. When Django (Jamie Foxx) is released from slavery by his new mentor Dr. King Schultz (Christoph Waltz), he becomes a bounty hunter, determined to carry out the rescue of his wife from Calvin Candie (Leonardo DiCaprio), the Mississippi plantation owner who kidnapped her.

It's probably fair to say that the Western has had its day. As a regular genre in the 30s from its usually low production costs, and peaking in the Spaghetti Western movement that made Clint Eastwood the icon that he is today, the days of actors like John Wayne dressed in spurs and stetsons are long past us now (bar the occasional exception, including the Coen Brothers' excellent take on True Grit in 2011). The reason for absence is most likely down to the old fashioned and often slow paced image of the traditional Western film that seems to have become the expectation for most people today - and with film trends heading towards the more successful high budget Science-Fiction/Action/Superhero genres instead, the simplicity of the Western seems like a relic of the past. But can Tarantino resolve that? With its old Western style and roots clearly buried within the genre, and its modern and energetic fast pace, the first trailer for Django Unchained looks like it could revitalise the Western genre for the audiences of today - Yee-Haa! Of course only time will tell, but if you don't believe me then why not check out the new trailer for yourself...


Django Unchained is released in cinemas across the UK on January 18th 2013.

Happy to see Tarantino unchaining Django, or is he better off left chained up? Will it be a blockbuster or lacklustre? Leave your comments below!
Posted by Dave Startup at 17:22