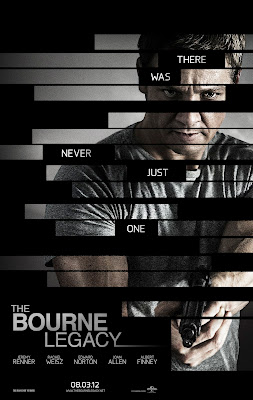 In 2002, Matt Damon hit the big screen in the role of Jason Bourne - the highly trained and spy with a mysterious background - in the blockbuster adaptation of Robert Ladlum's novel, The Bourne Identity. Two sequels later, and the Bourne franchise had re-written the book on the modern day spy film, with even the iconic Bond films arguably taking a leaf out of Bourne's book with the recent Daniel Craig films (the latest of which; Skyfall is released later this year). Now with Damon out of the picture, it is up to franchise newcomer Jeremy Renner (see recently as Hawkeye in Marvel's Avengers Assemble) to take over the reigns as Aaron Cross in this franchise reboot that delves deeper into the mysteries of the agency behind Jason Bourne; as it turns out he was not the only one...

The real question is; will this new direction in the franchise be able to live up to the success of the Damon lead trilogy? Of course only time will tell, but boasting a cast that also features the acting talents of Rachel Weisz and Edward Norton, amongst some recognisable faces from the first three films, The Bourne Legacy looks set to be a fantastic adrenaline pumping addition to the Bourne story. If you don't believe me, just check out the latest trailer below!


The Bourne Legacy is released in cinemas across the UK on August 13th 2012.

Can Treadstone go wrong, or will we have to Touchwood? Will it be a blockbuster or lacklustre? Leave your comments below!
Posted by Dave Startup at 12:59