George Valentin (Jean Dujardin) and Peppy Miller (Bérénice Bejo) in The Artist
Last night I went to see Michel Hazanavicius' new film The Artist, having driven far and wide to find a cinema actually showing it (due to the distributor's staggered release of the film) - and boy was it worth it!

The film follows the story of George Valentin (Jean Dujardin), a huge star of silent film, who struggles to maintain his rich and glamorous lifestyle after the advent of sound. Throughout the film we see the star hit the peak of his career, before falling into a downward spiral that sees him hit rock bottom, whilst the beautiful starlet Peppy Miller (Bérénice Bejo) whom Valentin himself helped rise to stardom becomes the biggest actress of the new era of talkies. Can Valentin overcome the odds to rise once again to the top? 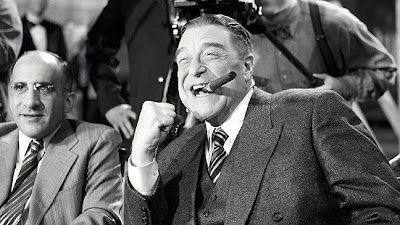 Al Zimmer (John Goodman) in The Artist
This beautiful film successfully celebrates the wonder of the golden age of cinema leaving audiences smiling in reminiscence, although it comes as something of a hollow end result. Whilst I sat smiling at the gorgeous shots of elegant packed out picture houses, which were accompanied by a live orchestra and audiences who don't break of the BBC Radio 5 Live Cinema Code of Conduct, I became aware of the fact that I was unfortunately sat in the less pristine auditorium of a major cinema chain whilst the guy in the row behind me happily munched his bottomless bag of extra crunchy crisps in my left ear throughout the entire film (even worse when watching a film that is SILENT!!!). As an 18-year-old it saddens me that I never saw this world, but this film certainly did bring it close to life.

To conclude, The Artist is a truly wonderful film, and little more can be said about it than has already been said by everyone else. It was so thrilling to see a film in the cinema that was so well made; a film that had more dimensions than most 3D Hollywood blockbusters could ever wish for, yet was as simple as it gets in its silent, black and white format (take note Michael Bay...).

Everything about this film is just wonderful, from the performances and style right down to the film's majestic score and reminiscence of the glamorous golden age of Hollywood, make sure to catch the inevitable next big Oscar winner whilst you can. The more I think about it, the more I want to see it again. Simply put - you'd be a fool to miss it!

It's clear that it will wipe the Oscars clean this year, I only hope that the best actor award can be awarded to Uggy the Dog who gave one of the finest performances that I have ever seen!...

The Artist is now showing in cinemas across the UK, although the staggered release means that it may be a small while before your local cinema shows it, but trust me when I say it's worth the wait!

Agree or Disagree? Leave your comments below!
Posted by Dave Startup at 17:26

Email ThisBlogThis!Share to TwitterShare to FacebookShare to Pinterest
Labels: Review, The Artist