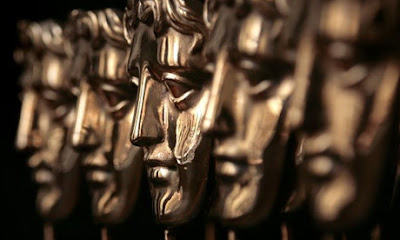 So it's that time of year again - awards season, and with the party already started with the Golden Globes, it's time to turn our attention towards the two main awards ceremonies that are actually worth paying attention to: The BAFTAs and The Oscars. With the release of the BAFTA nominations earlier this week, I thought it'd be interesting to post the nominees here and to make a prediction as to who will win for each category (my predicted winner will be in red and bold for each category), so we can then look back after the ceremony on the 12th of February and see just how close I was! So without further ado, let's begin...

I've said it before, and I'll say it again: this year the awards belong to The Artist. Having already performed well at the Golden Globes, it is inevitable that this film will go on with the same success at the upcoming BAFTAs and Oscars. I'd confidently put money on The Artist winning the best film award for both of these ceremonies.
OUTSTANDING BRITISH FILM

Whilst I'd love to see Lynne Ramsay's incredible film We Need to Talk About Kevin win this award as one of, if not my favourite films of last year, however I'm putting my money on Tinker, Tailer, Soldier, Spy to win this one. Also on of the year's best films, Tinker, Tailor featured an incredible cast, soundtrack and cinematography to create a truly fantastic adaptation of John le Carré's bestselling novel.

OUTSTANDING DEBUT BY A BRITISH WRITER, DIRECTOR OR PRODUCER

This is a bit of a tough one, and we could see a surprise winner come out of this category. The three that instantly jump out at me are Attack the Block, Submarine and Tyrannosaur to take the award, but to pick one of the three I think it will be Tyrannosaur that will just take the lead, although Attack the Block could give it a run for its money and take an unexpected victory on the evening...

FILM NOT IN THE ENGLISH LANGUAGE

If there is any justice in the world, then this award will go to Pedro Almodóvar's incredible horror piece The Skin I Live In. Also one of my top films of 2011, Almodóvar's film will genuinely leave you exiting the cinema in a state of psychological trauma - and as my roommate said as we left the cinema: "have you seen the Human Centipede? Yeah, this film was worse than THAT!..."

The clear favourite to win the best documentary award is by far and away Senna. I'd be very surprised if this film doesn't win the award here after the critics and general audiences, and racing fans and people who had never even heard of Senna alike were blown away by such a moving film. It is interesting to note however that the film failed to make onto the Oscar nomination longlist for the best documentary in what was a rather controversial move by the Academy - so the film definitely won't get an Oscar, but it'll be the favourite to win here.

Tintin to win-win! The Spielberg directed picture was a return to form for the world's most famous film director, with a fantastic adventure film that harkened back to the days of Spielberg's earlier works, in particular Raiders of the Lost Arc. Having just won at the Golden Globes for the same category this is my favourite to win here too.

The Artist is in my opinion going to be the inevitable big winner this year, so the odds of the best director award going to French filmmaker Michel Hazanavicius look pretty good; and it'd be a justified win too though, after all it's no easy task to make a new film that looks like it was made nearly a decade ago, especially one of this standard.

You may find it a be a bit odd to see what is an almost entirely silent film get my nod for the best original screenplay award (and if you think that's weird, wait 'til you get to the sound nominations...), however a screenplay is just as important here even without the dialogue (although it was obviously written anyway for the actors to say regardless - with the sound removed in post-production), but for a film as good as The Artist, which is up against not a lot of competition for this category (although I thought that The Guard is fantastic, and Midnight in Paris did just win the Golden Globe for its screenplay, so that could provide some small competition for the awards maverick of 2012...)

Another tough category, but I'm going to predict that the highly succesful Tinker, Tailor will fly the lfag for the British film industry here and win this award. Although if anyone of these tough competitors can give it a run for its money, then it'll be Moneyball which was written by one of the best screenwriters in Hollywood today: Aaron Sorkin.

Gary Oldman became an early favourite for the best actor award after the release of Tinker, Tailor last September, however with The Artist dominating the awards season and Jean Dujardin having already secured award wins for his role in the film, it's a fair bet to put him as favourite to win. Although I wouldn't be surprised to see Oldman win it on the night though, or even dark horse Michael Fassbender either...

Critics have appeared to be a bit hit and miss in their reviews of The Iron Lady, but despite whatever they may think about the film as a whole, most seem to be in agreement that Meryl Streep's performance as Maggie Thatcher seems to be a winner. Although I'd love to see Tilda Switon take it for her role in We need to Talk About Kevin which was one of if not my top film of the year.

For me there are no real stand out winners here for this category, it really could go to any one of these five nominees. As a complete stab in the dark, I'd instinctively say that it would go to either Jim Broadbent or Kenneth Branagh, possibly Philip Seymour Hoffman as a bit of a dark horse, but I think if I had to make a bet on it, I'd put my money on Broadbent.

Once again, just like the previous category this could go to anyone in this category. Although if I were to make a guess I'd say that the award could possibly go to Carey Mulligan, a young and talented British actress who has quickly risen the ranks to become a very well-known and much sought after actress in the industry.

Whilst the great John Williams is nominated for War Horse, and Tinker, Tailor featured a fantastic soundtrack from Alberto Iglesias, the award will go to The Artist (as will most) as let's face it, in a silent film the music become even more important, and this film work with that skilfully.

You know what, I'm gonna give The Artist a break here (despite also having great cinematography) and say that the award for cinematography will go to Tinker, Tailor, Soldier, Spy which in my opinion would well and truly deserve to win this award with its incredible cinematography.

Hmm... tough one! If I'm honest I'm really not sure which one to pick here, as all of them use editing very well. I think I'll back the British again and go for Tinker, Tailor again here (let's not let The Artist get too big-headed!)

Yet again this one's anyone's award to win. Whilst I'd love to see Tinker, Tailor win this award with its fantastic set design and use of mise-en-scene, I'm going to put money on it going to the final film in the Harry Potter franchise which does deserve some sort of nod at these awards for what it's done for the British film industry, and its extravogant fantasy sets do do a very effective job in bringing the world to life.

Once again, all of these nominees are worthy contenders and could easily take home this award. Usually this sort of award can be expected to go to some sort of period drama in which creating such a wardrobe of costumes is no easy feat, which puts Jane Eyre into the spotlight. Although despite this, I find it hard to resist putting forward The Artist again.... actually I've just changed my mind; period drama - the award goes to Jane Eyre.

Whilst instinctively (as with all of the applicable categories) my gut says The Artist, I can't help but think that Mr Potter could take this one as well along with production design. Hmm... Harry Potter (I don't know why I did that little dramatic pause, you could see who I predicted above anyway!)

The Artist - although there is sort of irony about a silent film winning the award for sound!

All of these films feature fantastic special visual effects, but the award will almost definitely go to Harry Potter, just on principle really - with the success that it's brought to the British film industry and as this is the last film of the franchise as well.

I'll admit here I have no idea! I've not seen any of these films nor have I even heard of any of them! Hang on, brb, Googling.... Ok so I just found trailers for the latter two, and whilst Bobby Yeah featured some pretty cool stop motion animation, A Morning Stroll had a very cool and unique stylistic look to it and most importantly - a catchy little soundtrack!

Yet again like with the animated short category - not got a clue here! As I can't be bothered to google these as there are even more here than the previous category, I'm going to just pick one out at random: Only Sound Remains (it'll be hilarious if I get this one right! Just sayin'...)

THE ORANGE WEDNESDAYS RISING STAR AWARD (voted for by the public)

Finally reached the final category, it's only taken me a week to do so! Ok so this one's voted for by the public, and whilst I think all of these guys are great and upcoming actors and directors, Chris O'Dowd will undoubtedly get the public's love after starring in the incredibly popular and much-loved TV series The IT Crowd.

So there we are, and if you managed to read through all of that well then kudos to you! Make sure to pop back to the blog after the awards ceremony on the 12th February to find out how many of my predictions were right (wish me luck, my heads on the line here!). I was planning on doing one for the Oscars too when those nominations are released, but this took ages and I have other stuff to do too; but just in case keep your eyes peeled for that too! (maybe...)

Agree or disagree? Leave your comments below on what you think about the BAFTA nominations and who you think will win!
Posted by Dave Startup at 21:50