One of the unexpected hits of 2010 was the off-beat not-so-superhero flick Kick-Ass, which brought the world a fresh and original take on the unstoppable superhero genre that dominates the modern multiplex cinema culture. Speed forward 3 years and with a new writer and director on board, as well as a whole host of new actors joining the cast ensemble, the adventures of amateur superhero Kick-Ass (Aaron Taylor-Johnson) and the expletive-screaming, limb-removing 11 turned 15 year old Hit-Girl (Chloë Grace Moretz) go bigger and more ambitious with Kick-Ass 2, as the dynamic duo have to fight off their biggest threat yet: sequel-itus...

There is a lot to enjoy in the follow-up to Kick-Ass, with the same wit and style returning along with the original's key characters, in a story that goes on to progress their stories naturally from the events of the first: Dave Lizewski/Kick-Ass faces the responsibilities of what he has inspired - an army of similarly masked vigilantes, Mindy Macready/Hit-Girl must adjust to living a normal life under the societal conventions of a normal teenage girl (against the conflicting philosophies of her late father in mind), and for Chris D'Amico (Christopher Mintz-Plasse) the call to avenge his father's death sees him becoming the world's first super-villain - The Motherf%&*^r. The film's structure is built around the journeys of these three returning characters, and as a result sees itself dividing into three separate plot-lines shortly after the film starts.

Through Dave's story and the introduction of the 'Justice Forever' team - headed by prosthetics laden Jim Carrey's Colonel Stars and Stripes - the film takes an interesting path that evokes the strange inventiveness of the film's predecessor. As too does the storyline of Chris D'Amico, who similarly introduces his own team of masked creations. However it is the tale of Hit-Girl this time - the shining star of the first film - that unfortunately lets down the anticipated sequel. There's no denying Moretz's talents as she returns to the role that made her name, but for a majority of the film we see her famous Hit-Girl character take off the mask to focus on a developing a normal life. Though natural progression, this is a big problem as the foul mouthed, 11 year old killing machine that made the film such a well enjoyed and memorable success is not present for a large portion of the film, whilst she gets tangled up into a bizarre high school teen-girl storyline instead. It was a while into this segment that I came to the unfortunate realisation that I was no longer watching Kick-Ass 2, but Mean Girls instead. If I wanted to see Mean Girls again I would have, but I paid to see another Kick-Ass film instead, and this demotion of Hit-Girl is partially what makes it something of a disappointment.

It is this segment as well that hosts perhaps the most horrifying piece of product placement that I have ever seen in a film. During a scene at a teen girl slumber party, the queen bee of the group informs Moretz's Mindy Macready that she is not a real girl without having Twilight, Channing Tatum and Union J in her life, before playing the music video to Union J's single; 'Carry You.' You'd be forgiven for not knowing who Union J actually are (a One Direction inspired boy band from a recent series of The X Factor), and it's clearly apparent that the US market is unaware too, which makes the randomness of this scene stink of cynicism all the more - as it is ridiculous to suggest that Union J are as influential as Twilight and Channing Tatum on this generation. As the song plays, the camera slowly tracks into it the music video until the film literally becomes an advert to allow the band to exploit the One Direction demographic and encourage audiences to make them just as profitable. All the while, we hear the bodily sounds and an ever increasing heartbeat as the 15 year old girls become audibly aroused at the pretty-boy group, with one exclaiming "I'm soaked!" by the end - totally sexualising a group of underaged 15 year old girls. If handled more tastefully, a scene like this could have worked in the film well as a ironic take on the pettiness of certain teen girls, but with the over-exaggerated audio effects playing over the screen engulfing music video (which well outstays its welcome), it become all the more apparent as to what the scene is actually trying to achieve is higher CD sales and mp3 downloads - in a way that is as morally questionable as it is totally out of place in a graphic 15 rated film that will miss the majority of its target market anyway. It may only be a small moment in the grand scale of things, but it took a franchise that I very much admired to a very disappointing low. 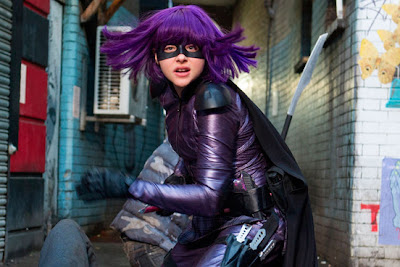 Hit-Girl - not your average teenage girl, in Kick-Ass 2.

Kick-Ass 2 certainly aims to go bigger than the original, and through its extended cast and storyline it certainly does. Yet it is widely known that bigger isn't always better, and unfortunately in this case the film struggles to pace itself under the huge weight of the expanded plot and ensemble. With so many new characters (and their alter-egos) being introduced into the franchise, certain characters never get the exposure or development that they need, and particular relationships never get the screen-time necessary to make them feel natural or believable. In the worst case scenario of this, Dave's girlfriend Katie (Lyndsy Fonseca) from the first film - whom is portrayed as the girl of Dave's dreams, and for the attention of whom he strives to gain at any cost - is limited to two brief moments in the film before disappearing entirely after a short spat which we are left to assume causes the end of their relationship. Not that it seems to matter to the emotionless Dave at all, who after pining for her so long seems to forget her in an instant. With so many plot-lines and characters emerging from Kick-Ass 2, the film struggles to gage the right balance in its transition from comic-book to film, which results in the film losing the heart that the original had and benefited from greatly.

It's good to finally see a return to the big screen for Kick-Ass, Hit-Girl, and the franchise's unique and quirky style, but with an overcomplicated plot and too many characters being introduced all at the same time, Kick-Ass 2 struggles to find its feet and reclaim the former glory of the very original first instalment. Through its three intertwining plotlines - including a very unusual Mean Girls inspired segment - Kick-Ass 2 certainly isn't without some enjoyment, especially as it comes to its grand climax, but throughout it is plagued with its own struggle to pace itself as it attempts and fails to best the original. In a rather unmemorable summer of cinema, it's a shame that this follow-up is not able to reclaim or better the enjoyment of the original, as something as original as the first Kick-Ass film feels greatly needed right now. "Try and have a little fun" says Col. Stars and Stripes, "otherwise, what's the point?" - well Jim, I tried, but for a lot of the film I simply was not amused. Oh, and can we all just try to forget that Union J disaster ever happened, please?...

Kick-Ass 2 (certificate 15) is now showing in cinemas across the UK.

Have you seen Kick-Ass 2? Leave your thoughts and opinions in the comments section below!
Posted by Dave Startup at 17:42