Based on shocking true events, American crime thriller The Frozen Ground follows the police manhunt for Robert Hansen (John Cusack), a man responsible for the raping and murdering of a number of young females in a small and desolate town in Alaska. Led by Sergeant Jack Halcombe (Nicolas Cage), the investigation gains a lot of traction after escaped victim Cindy Paulson (Vanessa Hudgens) provides her witness evidence - but time is ticking fast as Hansen is out to find and finish what he started on the one girl who can prove his guiltiness...

The most remarkable thing about Scott Walker's The Frozen Ground is the wording that fades on and off of the screen in the film's opening moments: 'based on true events.' Cemented by the unbelievable facts presented at the film's conclusion, and the tribute to the victims at the opening of the closing credits, a huge weight is brought to the film with the realisation that the psychotic inhuman mind of Robert Hansen is actually a very real one, and that these unimaginable events did occur. Pair that with the edgy and disturbingly brilliant performance given by Cusack in the role, and it's a strong formula for the stuff of nightmares!

This is however more or less where the film draws the line at unfortunately being anything more than an average police thriller. 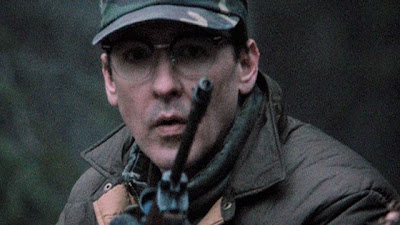 John Cusack as the psychotic Robert Hansen in The Frozen Ground.

The Frozen Ground may be a film of great performances - with Cage's down to Earth role providing a satisfying and surprisingly non-meme generating performance, and Hudgens fully shaking off the High School Musical alumni appearance as the strong traumatised escort (the only exception being a small role played by 50 Cent, a man seemingly unable to convey any form of emotion) - but even these aren't enough to cover up the fact that the film is little more than anything you can see in an American crime show such as CSI  or Criminal Minds. This is not to say that this is a totally bad thing, but it does however prevent it from becoming anything more than completely generic and average at best. It also doesn't help that at a running time of an hour and three quarters, the film does drag on at times; and as it, I did find my attention span beginning to grow thin on occasion too. As a result of it feeling like an episode of a TV show, I can't help but feel it might have benefited from a shortened running time, as well as a slightly simplified plot that doesn't leave lose ends, as The Frozen Ground did do at times too.

By no means is The Frozen Ground a bad film, but its inability to become anything different or overly cinematic does leave it feeling like something that you have probably seen before. It's leading cast, especially the performances of Cusack and Hudgens, do help to make The Frozen Ground a bit more interesting, and help to present a story that very much deserves to be told; yet especially in the midst of the summer blockbuster season of big cinematic releases, it might be just well to save some money and wait for this one to hit TV and DVD first instead.

The Frozen Ground (certificate 15) is released in cinemas across the UK on July 19th.

Are you looking forward to seeing The Frozen Ground? Perhaps you already have? Leave your thoughts and opinions in the comments section below!
Posted by Dave Startup at 16:42