Anyone over the age of 18 (and a few naughty fake I.D. holders under 18) will have probably experienced this at some point in their lives: the feeling that accompanies stepping out of a nightclub at 3am in the morning. It's a feeling that oh so many of us will have experienced from the later years of our youth: returning to the outside world having just experienced a barrage of flashing lights, images and fleeting moments, through a constant and unrelenting series of loud noises and bass-heavy tunes that have left your poor ears hearing everything as a distant muffled echo. As the distorted memories from what was probably a rather empty and difficult to follow evening of events begins to settle, it is at this point that we find ourselves asking that all important question: was that actually an experience that I enjoyed, and was it all really worth it? Sure you may have had a few moments of fun with some familiar faces along the way, but it's ultimately a question that is more often than not followed by a crushing feeling of disappointment and regret.

After the huge critical and financial successful of the most recent Warner Bros./DC Comics film collaboration - Christopher Nolan's Dark Knight Trilogy - Man of Steel follows closely in the footsteps of the recent Bat-franchise by giving Clark Kent, alias Superman (Henry Cavill), a Batman Begins style origin story set on a dark and more contemporary version of Earth. Yet with 'Supes' being born into his superpowers and getting used to them through childhood, the film features very little in the way of the character learning and adjusting to his new-found superhuman abilities that you might expect from most superhero origin films. Instead we have a tale of self-discovery: it's not about who Clark Kent was and what he's now become, it is about discovering who he has always been all along, and why. It is these parts of Man of Steel that are the most interesting and engaging to watch. Simple moments with Kevin Costner and Diane Lane as Clark's adopted Earth parents are subtle, touching and emotionally endearing, and apparitions of Russell Crowe as his biological Kryptonian father help to further Kent's understanding of who he is and how he must choose to live his life. Presented here through a non-linear Nolan-esque telling of a story that fans will already know more or less through the original Christopher Reeve film series, the film's narrative feels fresh and engaging, and the film as a whole benefits greatly for it. 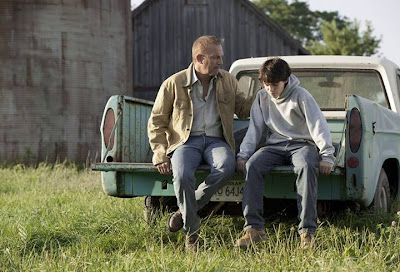 Subtlety is key: simple scenes between Clark and his adopted parents justify Man of Steel.


Yet to some extent, the focus on characters that makes Man of Steel so interesting also forms part of the film's undoing - namely in the relationship between Clark Kent and Lois Lane. Although Amy Adams does a great job of re-imagining the iconic Superman love interest, news reporter Lois Lane, and Henry Cavill absolutely has the visual presence of a perfect Superman, it is the rushed character development of the film's screenplay that truly lets down what could have been the beginnings of an appealing relationship. Instead of saving any time to allow the relationship to slowly blossom in a natural way, the screenplay chooses to thrust the two characters together rapidly; seemingly because they have to, rather than because it is the appropriate time to do so. As a result, any early signs of the fantastic chemistry and banterous dialogue that occur between the two (especially during an interrogation scene) are cut short by the need to forward the plot as quickly as possible in order to get to the big budget action sequences - and when the film presents an on-screen kiss towards its climax, the moment does not feel at all natural or necessary, but instead rushed into the film just for the sake of having it there. With an inevitable plan for more films to come (with MOS2 already in the works), there really is no reason why Zack Snyder and co. could not have slowed down such major character developments like this for potential follow-ups.

Alongside these issues in the screenplay is Man of Steel's complete lack of humour throughout. It's clear that Snyder is trying hard to avoid the camp humour style of the Marvel Avengers universe with its heightened gritty realism, yet even the comparable Dark Knight Trilogy which the film is trying to match is able to have some laughs at itself throughout. With just a few moments of very subtle humour featuring in a film about a man in a skin-tight blue costume with a bright red cape flapping at the rear, fighting a group of people wearing blackened Buzz Lightyear suits, it is clear that the film is taking itself far too seriously. I'm not looking for the comedy of the year, but a few more laughs and lighthearted moments certainly would have made Man of Steel a far more enjoyable film to watch, and may have even allowed for a greater engagement and likeability towards the film's character ensemble. But perhaps establishing characters and their emotional developments doesn't really matter in the grand scheme of things, for as soon as the film reaches its final forty minutes the concept of characters gets thrown straight out of the window: both figuratively and - unfortunately, far too often - literally. 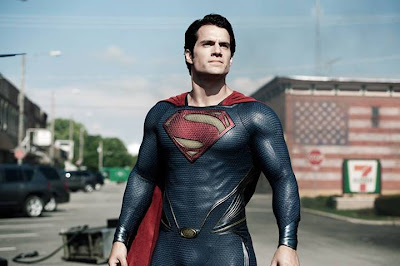 When the lead in a humourless film wears this, you know it needs to lighten up a bit...

As soon as the film's lead villain, the kryptonian General Zod (Michael Shannon), touches down on Earth with his dastardly team who threaten the safety of the planet in order to track down the Man of Steel himself, the film turns from the intriguing Nolan-style Hollywood art film character-drama into a Zack Snyder/Michael Bay CGI action wet dream. I'd be lying if I said I could totally follow what happened for the final forty minutes of Man of Steel, but it's almost incomprehensible: an endless series of explosions, noise, large scale destruction, and people flying through buildings. It all suddenly becomes very difficult to follow, and even more difficult to care. Constant, repetitive, nonsensical action between seemingly invisible characters (who appear to be unable to feel any form of pain or suffering at all) naturally drags on far too long, proving nothing more than the fact that people punching each other for forty minutes does in fact get boring; very, very quickly. And it seems that no-one else can be hurt either, as even the majority of the millions of Metropolis city inhabitants appear to flee collapsing buildings and exploding vehicles without even as much as a scratch - it's comparable to a darker adult version of The Avengers' final battle in New York, just with less interesting characters, and a lot less enjoyment. It's at this point where Man of Steel becomes its own worst enemy - what starts off as a promising film ultimately becomes everything you fear it could possibly be; a headache-educing hollow Hollywood corporate box-office machine.

Supremely stylish but unsatisfyingly empty, Man of Steel kicks off what could have been a promising Super-franchise, but a lack of humour and a seemingly endless finale of loud and unrelenting CGI destruction ultimately leaves a sense of disappointment that unfortunately looms over any positivity that you may initially have towards the film; leaving you to walk out of the cinema with an distasteful memory of 40 minutes of boredom and confusion. Not without merit, Man of Steel is by no means as good as it should have been with the name of The Dark Knight's Christopher Nolan attached to it. As the set-up to many inevitable sequels to come - and the on/off Justice League film that's still on everybody's lips - we can only hope that the already confirmed follow-up will be the film that we deserve, but it's almost certainly not the one we need right now.

Man of Steel (certificate 12A) is now showing in cinemas across the UK.

Have you seen Man of Steel? Leave your thoughts and opinions in the comments section below!
Posted by Dave Startup at 21:55