As the end of 2012 quickly approaches, and the film world is gearing up for the impending awards season, a new awards ceremony is about to arrive. Forget the Oscars, I'm of course talking about The First Annual Beyond Infinity Film Awards - otherwise know as The 2013 Beyond Infinities!* The Beyond Infinities will take place sometime early next January, and will commemorate the achievements in films released in the UK between January 1st and December 31st 2012 (or rather, the ones that I actually managed to see). But until then, I need your help...

I have decided to give you - the beautiful, smart and talented Beyond Infinity Film readers - a chance to get your voice heard for one of the categories. Ooh, how exciting!? The category in question is for Most Anticipated Film of 2013, and there are 10 nominees for you to choose from. Simply scroll down to the poll below, make your choice, and submit it - it couldn't be simpler! You have until Monday 31st December to cast your votes, and then the winner shall be announced on the day of the awards itself (date to be confirmed).

So what are you waiting for? It's time to get voting, and may the best film win... 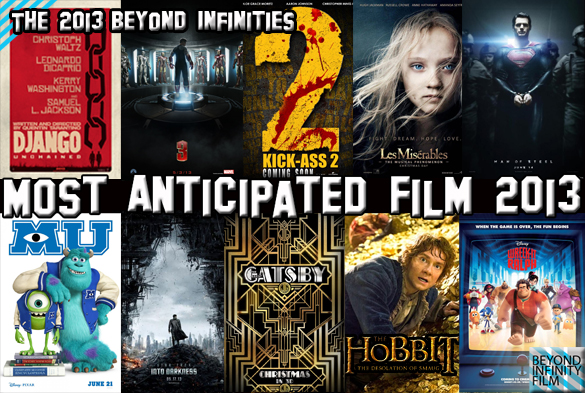 *Poll Closed. Thank you for voting.*

(*The BIFAs acronym was already taken by the British Independent Film Awards - oops!)

Keep your eyes peeled for the for the First Annual Beyond Infinity Film Awards early next January, where all the award winners will be announced...
Posted by Dave Startup at 18:27