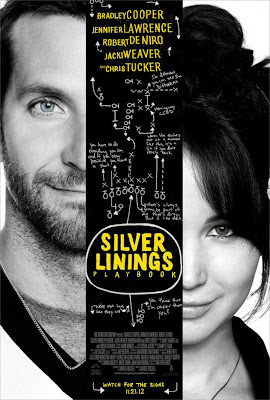 Quirky indie rom-com Silver Linings Playbook sees Bradley Cooper playing Pat; a man recently freed from a mental hospital after attempting to overcome the undiagnosed bipolar disorder that came to light after catching his wife cheating on him. Living with his parents (played by Jacki Weaver and Robert De Niro), Pat tries to get by in life without letting his illness stop him along the way; but when his world collides with Tiffany (Jennifer Lawrence) - a young woman also suffering from mental illness after the death of her husband - the two kindle a new friendship that allow each other to overcome their disorders and fit back into the world. 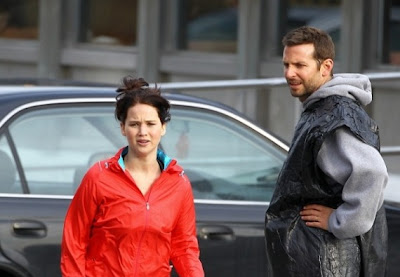 This latest film from director David O. Russell is about as bipolar from his previous film The Fighter as Cooper's character is within it; and is also just as much unlikely to win the coveted Oscar awards that it is predicted to be nominated for. That is not to say that the film is bad by any means, it just isn't award winning material, and it won't change your life - which is by no means a criticism! Silver Linings Playbook is a perfectly harmless piece of cinematic rom-com material that will suitably fill the appetite of those who are looking for that sort of film. Yet the often prestigious Weinstein production title and the awards season release do little to push the film into the realms of the extraordinary. This is a film that could see nominations coming its way early next year, but ultimately it's highly unlikely that the film will walk away with any awards at all.

But is that really a problem? No, not at all. Whilst the film isn't a game changer, it is certainly a refreshing release within the genre which adds a respectable layer to the film by dealing with the emotional hardships of two good-looking people suffering from mental illness; as opposed to just the emotional hardships of two good-looking people! Although the film doesn't delve quite as far into dealing with and examining the illnesses as much as I'd have liked it to, the film does tastefully approach them as to not offend anyone; and from time to time effective camera movements cleverly create uncomfortable and claustrophobic moments that allow you to momentarily jump inside the minds of these two lost souls as they try to confront the seemingly overwhelming world surrounding them. It's also important to point out that the film is funny too, and does inject a satisfying sense of humour into a tough subject matter in order to make it a satisfying watch. 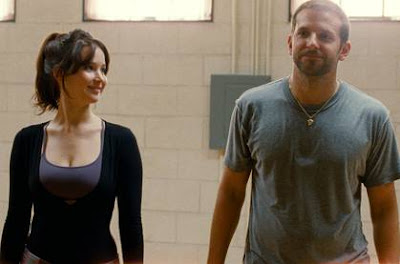 Lawrence and Cooper rehearsing for the big dance - yes, it has a big dance too!

A solid cast do a sufficient job to bring the story to life, with Lawrence coming fresh out of very successful adaptation of The Hunger Games (of which I was reminded as she makes an intertextual quip about Lord of the Flies) stealing the show. Cooper does a satisfying job with a character who - after pissing around in two Hangover films (the third set for release next summer) - allows him to take on a more challenging role, although as the leading man I'd have liked to have seen him challenge the character even further (a fault, albeit, of the script partially). Robert De Niro provides a pleasant presence in the film, although equally disappointing with the film simultaneously reminding us that his glory days are well behind him now. Chris Tucker - who is supposedly being eyed up for the already rumoured Hollywood remake of this year's remarkable French film Untouchable - gives a glimmer of hope for the film with the actor effortless breathing life into his minor supporting character who also suffers from mental illness.

Despite the push for its awards season release date, Silver Linings Playbook is not a film that will set the world on fire, but one that provides a satisfyingly feel good rom-com experience that does delve into a slightly deeper realm by dealing with the challenging issues of mental illness. Yet whilst the film may leave you with a slight smile on your face and skip in your step, it would have been a far more fulfilling experience if it had been ballsy enough to take a much more challenging look into the life of those suffering from mental illness, which in turn would have made the film's pay off much more rewarding. For the fact that it avoids this, the film that could have been extraordinary falls disappointingly short; but Silver Linings Playbook should satisfy those who do like a good bit of feel good romantic fluff and go in expecting just that.

Silver Linings Playbook (certificate 15) is now showing in cinemas across the UK.


Have you seen Silver Linings Playbook? Agree or disagree with my review? Leave your thoughts and opinions in the comments section below!
Posted by Dave Startup at 20:27