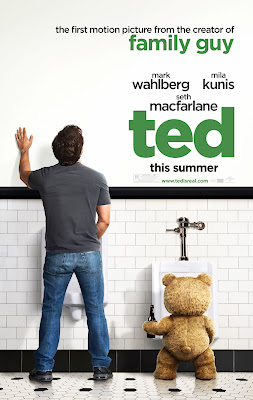 I'd like to say that Ted left me in more stitches than Ted himself is made of, but not unlike the above poster; that'd be taking the pee...

"Now if there's one thing you can be sure of, it's that nothing is more powerful than a young boy's wish" opens the narrator (Patrick Stewart), before continuing; "...except an Apache helicopter. An Apache helicopter has machine guns AND missiles. It is an unbelievably impressive complement of weaponry, an absolute death machine." Setting the tone for the film, the young boy he refers to is John Bennett (Bretton Manley) who makes a Christmas wish that his best friend Teddy the teddy bear could be alive. And sure enough in that traditional clichéd Christmas miracle style he does. Years pass and both John (Mark Wahlberg) and Ted (Seth MacFarlane) grow up, but the toils of Ted's celebrity status have taken their toll on him and they now live their drink and drug lifestyles as grown adults. However problems arise when John's girlfriend Lori (Mila Kunis) has enough of John letting her down as a result of Ted's wild antics, testing their relationship to the limits...

Now I know I'm going to be going against the majority of my peers and demographic here and seriously putting all of my street-cred on the line when I say this, so here goes: I didn't think Ted was that good. There I said it! I know I risk getting a lot of stick for this, and believe me I already have, but hear me out and I'll explain to you why for me at least Family Guy's Seth MacFarlane put the 'Ted' into 'Disappointed,' 'Tedious' and 'Wanted & Expected More'... 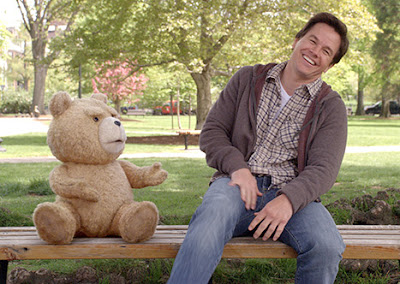 Ted and John misbehave in the park (no not like that, but the film isn't beyond that sort of humour of course!)

Seth MacFarlane is best known for making the hit animated TV series Family Guy. You'd think that this unique style of humour would be the saving grace for this film, and something that would hopefully set it apart from most other generic Hollywood comedies today, but in fact that's the reason the film doesn't work. With an episode of Family Guy, each lasting around about 20 minutes long, the show is mostly just a format for jokes and random pop-culture tangents (if you search for clips on YouTube most of them are only 5 to 10 seconds long as the episodes are essentially focused on being a string of jokes), with a minor plot merely being the backbone upon which the jokes can be placed upon - and that works because it's only 20 minute long. This same formula has been transferred to the big screen for Ted, except Ted isn't 20 minutes long, it's just short of 2 hours. By stretching out the running time and transferring it to a live action film the jokes cannot be as random, nor can they be as often either as the film would look more like 2 hours of random clips making an almost You've Been Framed style montage of gags with no sign of any direction. Unfortunately for Ted this exposes the very weak plot of the film, which is essentially a poor, overly clichéd and done to death rom-com formula which is completely predictable from the very start.

But surely that's alright though isn't it, because as we know from the likes of Family Guy the plot is just the backbone for the jokes to be placed on top of!? Unfortunately not, the plot of the story is key unfortunately folks - it's film 101. Looking past the weak plot though, are the jokes even all up to that anyway? Well I'll admit a handful of them were actually very funny, and I did have a good laugh at some of the gags throughout the film. What I do like is MacFarlane's style (particularly the use of Family Guy like music), the clear love for cinema that he himself has (with a number of brilliant references to cult film classics such as Star Wars, Indiana Jones, E.T, and the biggest of all Flash Gordon which has a particularly large influence), and a couple of surprise cameos that pop up along the way too. Mark Wahlberg also does a good job in the lead role, but I did ultimately feel that he was limited by the film and can perform a lot better. 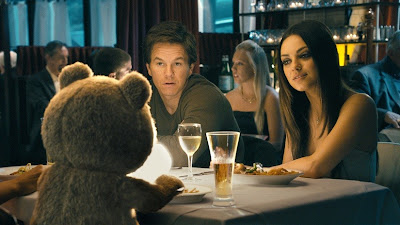 Ted, John and Lori decide to eat out (the bear would make a dirty joke about that caption, I'll refrain from doing so...)

Yet whilst Ted has its moments and good laughs, most of the jokes aren't anything particularly special. Between each of the bigger gags there almost seems to be a bit of a lull where smaller gags bubble up before bursting into a bigger moment (it is no coincidence that it is often here where the weakness of the plot is revealed, and the audience gets a lot quieter as the hysterics drop). A lot of these are okay and do their job of filling the gaps as the smaller jokes of the film, but a lot more of them end up being below average and do become quite tedious. It's at its lowest points were the film opts for 'jokes' that rely upon using swear words, insults, and extremities in order to give the appearance of them being funny. This is the laziest form of writing for comedy and happens far too much in films today; it's the ideology that if a normal sentence isn't funny, then placing a swear word into that sentence instantly makes it funny. There is nothing particularly exceptional or overly memorable about this and it ultimately leads to a lot of the film being entirely forgettable.

Even a lot of the jokes that do work aren't as stand out or as original as you'd expect from the film or MacFarlane either. One of the film's better series of gags comes from the narrator's voice over, which whilst being witty is essentially the same as that of the voice over in The Hitchhiker's Guide to the Galaxy, a film that was released nearly 10 years ago (the quote that I used at the start is the perfect example of this). The premise of the film, and the main gag itself which is of course the adult and inappropriate teddy bear is also an idea that has been done before, albeit not on the big screen, but in the video game Naughty Bear (in which you play as a serial killing teddy bear). Speaking of which, this main premise - the 2 hour joke of Ted the swear bear (as I like to call him - there's a joke opportunity missed MacFarlane!) - is one that you can ultimately see from the trailer alone, and not unlike a segment that you'd find in an episode of Family Guy incidentally (which as I established earlier would only last for about 5 to 10 seconds). Unfortunately alongside this some of the film's best jokes are also used in the trailer, and are therefore unsurprising and unfunny when seen in the film; one in particular in fact caused the guy sitting next to me to turn to his mate and say "oh this bit's good", only for the majority of the fully booked screen to then remain silent without as much as a chuckle for the whole segment (spoiler alert: this scene does feature in the trailer below...) 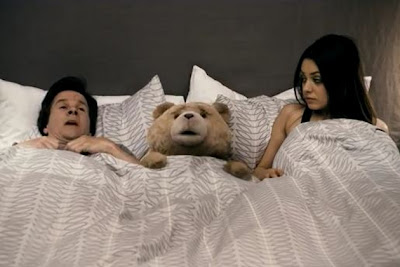 I know I'll be fighting against the majority here, and I'm sure that most people who go to see Ted will say that they enjoyed it. This is a Family Guy film made and marketed for the Family Guy fans, with creator of both Seth MacFarlane re-using the same style, structure, brand of humour and most of the cast from the popular animated TV show. Unfortunately the same structure doesn't work when stretched out for the big screen, and the handful of good gags aren't enough to make up for the disappointment that comes from the poor plot and the majority of sub-standard jokes. The majority of the film is ultimately forgettable, and for anyone who's already seen the film, stop and think; just how many of the jokes are actually memorable enough to recall now? Ted is a fairly interesting premise, but one that fails to outlive anything much more than the trailer.

(Please be aware that the trailer below is not safe for work and is inappropriate for anyone under the age of 15...)

Ted is now showing in cinemas across the UK.


Have you met Ted!? Agree or Disagree with my review? Leave your comments below!
Posted by Dave Startup at 22:23