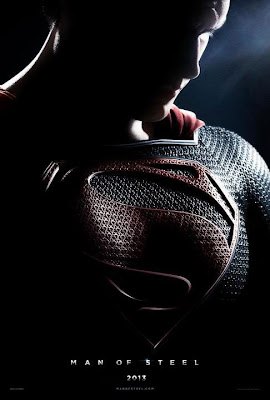 Superman gets the Batman Begins treatment; so 'Superman Starts'!?...

2006 was the year that last saw the world's most iconic superhero grace the big screen, and next year; Superman Returns (brownie points if you got that!). After being sent to Earth as a child, Clark Kent is adopted into a human family in Kansas. Time passes and today Kent, who disguises his identity as a journalist, protects the Earth with his extraordinary powers whenever he dons his iconic costume to become Superman. Soon however Superman will be tested to the limits when a deadly threat strikes...

Whilst I'm not a huge Superman fan and haven't really followed his many other big screen outings much, I do know how big a deal this film could be. Firstly Man of Steel boasts the talents of David S. Goyer and Christopher Nolan on writing duties, the double act behind the incredible Dark Knight Trilogy which has just come to an epic conclusion with The Dark Knight Rises which is now showing in cinemas. These two men have just finished reviving the once dead in the water Batman franchise, turning it into what most people would deem the best superhero films of all time - if anyone can make a Superman film work, it's these guys, and as you can tell by the trailer the film is clearly taking the Batman Begins approach to relaunch the franchise. Secondly, after the success of Marvel's Avengers Assemble, rumours have been persistent that rival DC comics are eager to get a Justice League film in motion - so this film could be the beginning of something much bigger! Alongside these factors, just from the trailer and poster alone it does look like this could be a very good film, and it's certainly the first Superman film that has grabbed my attention in a big way; check out the trailer for yourself and let me know what you think too:

Are you expecting little from this film, or do you think it will be super...man!? Will it be a blockbuster or lacklustre? Leave your comments below!
Posted by Dave Startup at 13:52