Review: The Woman In Black 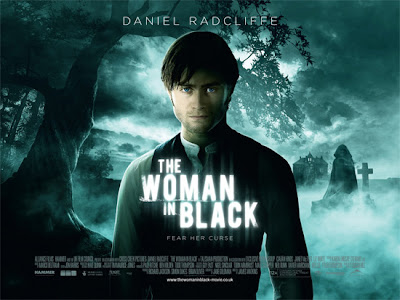 Daniel Radcliffe attempts to defeat his greatest adversary yet: typecasting - in Harry Potter and the Woman in Black!

The classic British horror studio Hammer, the studio behind some of the most iconic horror films including Christopher Lee's Dracula, makes a welcome and much overdue return to the big screen limelight with their adaptation of Susan Hill's 1983 novel: The Woman in Black. Well known to a lot of people today through the terrifying West End stage play, The Woman in Black follows the story of Arthur Kipps (Daniel Radcliffe), a young solicitor and single father (after the untimely passing of his wife during labour to his son) who has the tricky task of sorting out and selling Eel Marsh House. Soon after his unwelcome arrival to the village, Kipps discovers the tragic curse of the house, and it's paranormal inhabitant; the ghostly Woman in Black.

Directed by James Watkins (Eden Lake) and written by Jane Goldman (Kick-Ass, X-Men: First Class), the film does a very good job of capturing the tensions and thrills of an old fashioned horror film. Numerous scenes of the film are beautifully shot in a way to hide and reveal the ghostly characters in a truly chilling manor. Even the loud-noise moments used to make the viewers jump out their seats - a technique that can often come across as cheap and cheesy with little skill needed and little reward (Paranormal Activity, I'm looking at you!), are done during this film very well too as a way to support the the more subtle and perfectly executed thrills, concepts and themes that allow the film to excel and have greater effect upon its audience. The story itself is fantastically adapted to the big screen, despite the fact as I'm reliably informed that there are some significant changes made from the book and the play. Whilst the ending initially seems slightly rushed and poorly thought out, the film's final conclusion is one that works well for the big screen and makes the film last with its audience long after they leave the cinema. 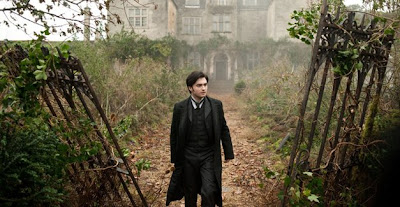 Arthur Kipps (Daniel Radcliffe) in The Woman in Black

However the film is far from perfect, with one main problem causing it to unfortunately flounder: Daniel Radcliffe. Whilst Radcliffe has clearly done the job the producers wanted him to do: sell the film to the Harry Potter market (hence the 12A certificate instead of 15) making it one of the most successful British horror films ever made, his performance ultimately lets the film down. As I sat watching the opening scenes as the film introduced his character, I experienced something that I have never experienced before: I sat there thinking "he's just acting" - and worse than that, "he's just trying to act!" Whilst even the biggest actors instantly become their characters within a film rather than leaving the audience remembering their external lives and careers, Radcliffe's poor and unbelievable acting brought me out of the film and prevented me from connecting to his character, background and story - something that is crucial in any film, particularly in this one. This is partly due to the fact that Radcliffe seems too young to be a father figure, but ultimately his performance on the whole lets down the film. Later in the film, when the Scooby-Doo style ghost chase commences, Radcliffe then does the one thing he probably didn't want to do; he becomes Harry Potter, with too much of a similar performance as his character urgently rushes around to save the day. Radcliffe, who clearly needed a film like this in order to separate himself quickly from the heavy burden of the Harry Potter franchise, which has lead his career for the last decade, ultimately fails to establish himself as a serious actor in this film; it'll certainly be interesting to see where his career goes next...

The Woman in Black does a great job of creating a chilling and thrilling ghost story that revisits the old fashioned feel of the classic horror film from the likes of Hammer; thanks to fantastic direction from James Watkins and a brilliantly adapted screenplay by Jane Goldman. However the film feels let down by the main performance by Daniel Radcliffe, who can't seem to shake off the ghost of Harry Potter let alone the ghost of the Woman in Black! In comparison to other recent horror film offerings including the Paranormal Activity and Saw franchises, this film is a horror genre treat that is certainly worth a watch.

The Woman in Black is still showing in cinemas across the UK.


Agree or Disagree? Leave your comments below!
Posted by Dave Startup at 23:05

Email ThisBlogThis!Share to TwitterShare to FacebookShare to Pinterest
Labels: Harry Potter, Review, The Woman in Black