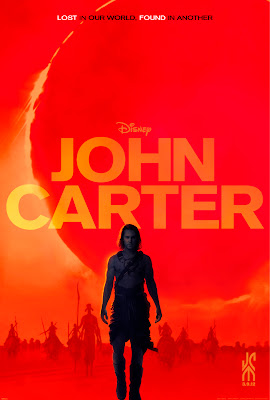 Originally titled 'A Princess of Mars,' renamed (too girly) to 'John Carter of Mars,' then renamed again (too boyish) to 'John Carter' (by the DVD release it'll just be 'JC'!); the sci-fi fantasy that inspired them all has finally made it to the big screen!

Although from seeing the film and it's trailers you wouldn't be blamed for thinking that this film has been inspired by blockbuster sci-fi's such as the Star Wars franchise and Avatar; it's interesting to note that John Carter was actually the inspiration for them! Published in 1917, Edgar Rice Burroughs' novel 'A Princess of Mars' was the first novel in his Barsoom series - a series of books that have notably been a large source of inspiration for cinematic science fiction fantasy films; shaping the genre as we know it today. Now nearly a century after it was first published, the Earth and Mars based adventures of John Carter have lovingly been brought to the big screen in an epic film directed by long-time fan of the books, Andrew Stanton. Well know for his work at Pixar directing Finding Nemo and Wall-E, as well as writing for many of their other films right from the animation studio's inception, this is Stanton's first live-action feature, although not a huge change of style for him as a lot of the film and its characters are made via CGI anyway!

Rather surprisingly, the film itself opens to the setting of America in the late 1800s - both in the city and the far west. After a western style introduction to our sharp shooting, gun slinging hero John Carter (Taylor Kitsch), an unexpected turn leads to Carter being stranded on Mars - known to its inhabitants as Barsoom. From here on we are swept off into a science fiction fantasy adventure as John Carter must save the beautiful Princess Dejah Thoris (Lynn Collins), her people and the Thark population of Barsoom from a devious plot for domination by a shape shifting group known as the Holy Therns, lead by the deceptive Matai Shang (Mark Strong). 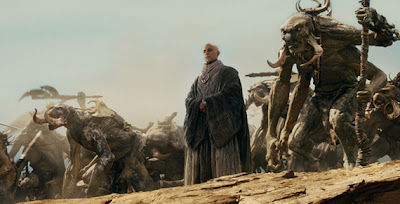 With a lot of poor press surrounding the film recently from its poor critical reception, John Carter is not actually as bad as you may go in expecting it to be. Stanton and his effects team do an incredible job in bringing the world of Barsoom and it's inhabitants to the big screen in a way that respects and stays true to the original novel, but adapts it to appeal and work with a modern audience and its expectations (the films that it once inspired seem to have now inspired it!) - but CGI effects do not make a film good. By no means is John Carter the best film ever made, but it's far from the worst; whilst the story is long in parts and can at times be lacking in action, the film features a number of fantastic action sequences and a unique and well executed dynamic with Carter's exciting jumping abilities which are smoothly executed. The plot of the film can at times drag, but it provides an interesting story steeped in history that is engaging and enjoyable to watch. Taylor Kitsch won't win an Oscar for his performance as the titular hero, but he successfully pulls off a tough guy hero with a warm heart that echoes back to western greats through the decades. The rest of the acting ensemble (both live and motion capture CGI) isn't ground breaking or attention grabbing (although it is good to see Mark Strong expand his acting credentials with a villain role for a change *end-of-sarcasm*), and with no real big star names to sell the film on either, they do a good job of bringing the fun and epic stories of Barsoom to life. Yes the film has it's flaws, but it's not setting out to be the best film ever made; director Stanton simply wanted to finally bring the world of Burroughs' cinematically inspiring novel to the big screen in a film that does it justice - and he has achieved this with John Carter.

So why is it that John Carter is expected to flop so badly then if it isn't that bad? The film had an estimated budget of $250 million and it is said that films need to make a return of double the budget to be classed as a success - meaning that JC would need to make back at least $500 million in the world wide box office; it won't! Since it's release a week ago John Carter has performed poorly to say the least in the US box office (failing to make it to the top of the weekend box office whilst 'The Lorax' retained the number 1 spot for a second week), but performing slightly better internationally - now the only hope for the films seems to be if it can break even - but the film's not that bad, and far worse films make much more money; so what's wrong with John Carter. Despite the genuinely poor (and in my opinion slightly unfair) reviews and word of mouth that critics given the film, John Carter's main flaw is not actually within the film itself: the underlying flaw is Disney's marketing strategy. I've said from the start that I didn't think the trailers would do the film justice (and they don't) as they almost appear to dumb down the selling of the film to attract people with 'shiney' CGI effects and cliched Star Wars-esque sci-fi, but outside of the trailers other sources of marketing have been ignored. With little in the way of posters, TV adverts, promotional tie-ins, and most shockingly of all for a film which should partly target a young male demographic (a market that could have turned this into a large franchise), no toys, books video game or other merchandise releases; for a film based on a century old book few people know anything about the film or franchise at all. This links nicely into the issue of the ever changing title (which as I pointed out at the start has seen many transformations); 'John Carter' says nothing about the film - for all intents and purposes it's just a random guy's name! The problem here is that it evokes nothing in the way of genre or themes for the film; it sets nothing in the way of expectations and it says nothing about what will happen in the film - at the end of the day it won't intrigue people, they just simply won't care. With a source material like Edgar Rice Burroughs' novel which inspired the likes of Star Wars, Disney simply marketed this film extremely poorly when it really shouldn't have.

Despite it's poor marketing from Disney (disappointing especially after the incredibly successful parody campaign recently created to market The Muppets which lead to it's great success), John Carter is a pleasant surprise and a very enjoyable and watchable film that stands out from some of today's other more lacklustre blockbuster franchises; a film which through a number of genre's creates the immersive world of the sci-fi fantasy epic that clearly inspired some of the cinematic greats that we love today. John Carter isn't the best film and it will flop; struggling to break-even - but it is worth a watch as certainly doesn't deserve to.

John Carter is showing in cinemas across the UK now.


Agree or Disagree? Leave your comments below!
Posted by Dave Startup at 17:48